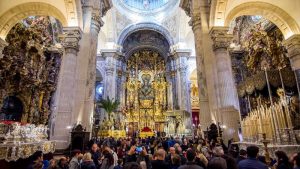 We consider the article that we are going to develop important so that the reader acquires full knowledge of everything related to the Church and its customs, its precepts, sacraments and especially the topic to be discussed about the characteristics of the Church . We invite the reader to learn and discover more.

Before entering in relation to the subject on the characteristics of the Church; we define the term Church, and it deals with a construction built with the purpose of having religious institutions function in it, however the term construction is considered a more precise or specific institution.

In this case, as we said at the beginning, our topic is about the Catholic Church, which has more than 1,200 million faithful; unlike other established churches in the world.

One of the characteristics of the church in the world is monotheistic (belief in one God), which presents the figure of Jesus as the Son of God, also called Messiah or Christ.

The Church upholds and has upheld since its inception the teachings of Jesus Christ, and the duty of Christians to spread his word and also grant the sacraments that it establishes.

Among the attributes that the Church presents, we can determine some that are considered main and that we will develop for each of its word components:

One: this represents the first of the characteristics of the Church. It was founded as we all know by Christ himself, this teaching is the one that predominates in the formed Church. Likewise, it is established that God is only one; Likewise, it is stated that the Church is also one, although there are currently a diversity of them created with other mentions. The unity of the Church is one of faith, government and communion.

Holy: this term means the close relationship with God; because he is its founder and is holy, so are all its members and the mission it has. Within the Church the faithful or believers are encouraged to do holy actions. Through the sacraments human beings achieve this sanctification.

Catholic: as for this term it means “universal”. The denomination of universal carries it for being of right, since Jesus Christ himself founded it for all his children in the entire world and for all times. Likewise, his mission is to fulfill what Jesus left us as a task.

Apostolic: the representatives of the Church created by Jesus have the power to be successors of himself as well as of his apostles. Its function is to make known both the word of God and all the teachings that he left us and that is embodied in the Holy Bible.

This sovereignty or hierarchy as we said that the Catholic Church has, is conferred directly from Jesus Christ and his apostles, that is, the representatives of the Clergy, have such authority as successors of those who founded it (Jesus and the Apostles).

As we all know, the highest authority of the Catholic Church is the Pope on earth. After him come the bishops, priests established by the dioceses.

The sacraments of confirmation and communion can only be imparted by bishops as well as by priestly orders. Cardinals from time to time have or are appointed to other duties thus fulfilling specific orders. However, it is good to make it clear that no bishop presents authority over others, even if he was a cardinal.

There are other hierarchical figures such as vicars, chaplains and parish priests, who are fully empowered to impart the sacred sacraments. As for the category of ecclesiastical hierarchies, the lowest degree is the deacon.

These are not priests, however they are part of the ministry. Deacons are usually momentary or permanent.

The characteristics of the Catholic Church determine several precepts that the faithful or members of the same must keep in mind and comply with when they are established at different times. Among these are the following:

Participation in the Holy Mass or Eucharist; Work of any kind should be avoided on Sundays or religious holidays that are going to be celebrated.

The faithful must practice a good confession and make it frequently, it is recommended at least once a year.

It is also recommended that a communion be made at Easter time, at least once a year as well.

Fasting and doing any work on days established as special religious dates should be avoided.

With this sacrament the faithful pass to inclusion within the Catholic Church. This sacrament is applied by the Church for the purification of the believer or member of the same, this is done as is known by all by previously pouring holy water on the faithful (mainly on children), however it may happen that baptism is performed on people already adults. In this aspect we must remember that when Jesus received baptism he was already an adult and was made by John the Baptist.

We are of the opinion that as long as the person needs it and requests it, baptism can and should be administered, and thus the soul of the person will feel the direct presence of the Holy Spirit within the faithful.

However, if the person is baptized and wishes to abandon this sacrament, they can do so through apostasy.

There is a measure by which the Church prevents him from being part of its activities, however it never expels the believer; this measure is called “excommunication”.

The Church has attached to it a series of institutions that are responsible for carrying out social works, among which we can mention:

Cáritas: this institution has been established in various countries carrying out social and humanity work.

Hospitals and residences: approximately 35,000 assistance institutions also make up the Catholic Church. Among these institutions we can mention hospitals, centers for the elderly, places for people with disabilities, wards for patients with serious or terminal illnesses, etc.

There are educational institutions in countries around the world that are responsible for providing religious education. Among these institutions we can mention 1,000 universities and approximately 125,000 schools.

Likewise, the Church currently teaches about the Church and religion to young people, children, approximately 55 million.

The financing of the Church is made up of the autonomy of the legal entities that are represented by the associations themselves made up of parishes, public and private associations of the faithful, among others.

Another way for the Church to acquire funds can be determined like this, so that the reader has a clear idea of ​​it:

Through private institutions or associated with it.

Earnings that come from investments.

Collection at the level of private or public institutions.

Regarding this topic about making the various decisions regarding faith, as well as others; an ecumenical meeting or council is established, in which the bishops participate, presided over by the Supreme Pontiff or Pope.

Another of the decisions of the Church is the election of the Pope, either when the current one makes a decision to resign or why he dies. The Pope who will replace him is done with a conclave, or equally an assembly in which he debates through the Cardinals.

The definition of sacrament is considered as a custom, a rite, which together with faith manages to grant us the grace of God. The Church directs seven sacraments, which we can mention as follows:

Confirmation: with this sacrament it is possible to reaffirm faith in Jesus Christ and also confirm one’s own baptism.

Eucharist: through this sacrament we are reminded of the moment of Jesus’ dinner with his apostles, as well as his Passion and resurrection. This sacrament is given through the consecrated host, which is the living representation of Christ.

Penance: this is the act of confessing the sins of the faithful to the priest or hierarchical representation of God in the Church; Likewise, through this sacrament penance is fulfilled through which we reconcile with Jesus Christ later for having committed sin.

Anointing of the Sick: This is a sacrament of healing the sick; It is used by the priest for the healing of the body and the soul and thus many times by means of this the sick person after he is anointed with it, recovers or affirms his faith.

Priestly order: through this sacrament you can get to take the habits and become a priest; With this sacrament the initiate reaches the power of authority so that the functions of the cult are applied.

Marriage: as we all know through this sacrament the man and the woman make a single union in order to create a new family.