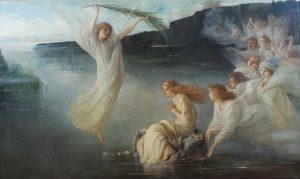 Santa Cristina,  also known as Cristina the Great Martyr, is a venerable virgin of the third century admired by Catholic Temples, Orthodox Sanctuaries and Anglican Chapels. She is commemorated on July 24. God always made her resist all the mistreatment for which she was condemned by one of her family members, her father, who hated the Christian faith.

Review of the life of Saint Christina

Cristina was born in Tuscany and was the daughter of Urbano, who was a great pagan leader of the region, the story goes that Cristina was born on the shores of Lake Bolsena, there are those who assure that it was in a town that was on the right side of this beautiful lake, which despite the different transformations that have been carried out in nature, is still greatly benefited by it.

Following the story, it is said that the father of little Cristina was the main enemy of the Christians. His resentment is so much that her own daughter from a very young age begins to become fond of the stories of Jesus Christ, how he was persecuted, then captured, subdued and mistreated.

The curiosity was so, so great that he begins to change his ideology when he begins to discover that there are so many Christians that his own father judged, humiliated and condemned for the simple fact of being faithful believers in his ideals and followers of our Lord Jesus.

Quickly, his affection for this religion, already hidden from his father, begins to increase and he begins to collect data that could facilitate the explanation of this religion that now seemed important to him.

Cristina manages to have contacts with some ladies who were devoted to the Christian faith, who manage to guide and instruct her, her fascination and faith became so great that she decides to be baptized, of course, all in secret and there when she takes the name of Cristina. between his jokes, games and even pranks, I get to the point where his father begins to lose his mind and goes out of his mind spoken colloquially and the reason for the faith of his little daughter begins to mortify him.

Cristina comes up with the brilliant idea of ​​provisionally spoiling a statuette waiting to have the means to later compose it, but it turns out that her father guarded it with suspicion and care, this statuette was like an ideology for him.

It was always kept clean, it was almost part of the great family patrimony, because Cristina took it as her own and destroyed it and all this did not seem enough to her and she has taken its material to give it to the poor so that with it it could be sold and reused and With the money from this, some of their many needs were covered.

Of course, Urbano discovered her and at that moment he was filled with a deep anger not only for his action but when he realized that his daughter had no respect for his authority, he began to be more radical and when he was hurt he began to treat or better said to mistreat her with the ugliest treatment, I dare to say that even worse than those that were directed at the other devotees to the Christian faith.

Below I will quote some of the words spoken by Urbano:

“It must not be said in the world that a girl gave me the law, nor that these Christian sorcerers triumph over our gods in the midst of my own family. I will see if her spells are stronger than my torments and if the patience of a daughter will make a mockery of a father’s anger.

No punishment was enough and the governed ordered her to be whipped and abused with a hook, usually made of iron and with a sharp point, to hold things, although it hurt him to be offended by his own daughter and the fact of seeing his daughter like this amazes him. how cristina resisted all this and continued with her attitude and her new ideals.

At one point the story narrates that her totally desperate father orders a burning brazier to be prepared for him to slowly burn his daughter’s body, this brazier became a kind of bonfire attended by the executioners and one who another curious close, after this event the father decides that he can not continue to have cristina in his house and was put in jail with the instructions that he gave.

Their dungeons should not be changed, they should remain in the darkest, gloomy one that inspires fear and sadness. Just as he must have been hungry.

It is in this dungeon that the grace of God touches Cristina, and she begins to be visited and comforted by luminous apparitions of angels who, seeing her defenseless and without strength, begin to heal her wounds and offer her their protection.

The father sends guards over his daughter’s body, and upon receiving news that she was still alive and even in the desolation of the dungeon she was in very good condition, he becomes furious, seeing that she did not die, so let’s remember that he thought that she I was under a powerful spell.

Instantly he orders her death and asks that a rope be tied around her neck accompanied by a very heavy stone and being thus thrown into the lake where it is said that she was born, this order is fulfilled and the little girl is thrown into the lake, but one of the angels who had offered her protection carries her to shore. And at night she dies urban in her placid bed from a hot flash that she gave him.

After Urbano’s death, a new leader named Dion takes over. Cristina manages to survive that death order that her own father promoted, but it turns out that the new governor was enthusiastic about continuing with the orders against the life of a martyr girl (Cristina), since the governor presumed that the former leader did not He knew how to solve the situation, and for that he had come.

She begins by taking possession of everything that Cristina once had, but all the banal things that she had left aside for the time being, the worrying thing was the first of her orders, quite cruel to say, among them was the capture of the martyr’s girl in order to stagnate boiling oil mixed with pitch and spread it over her body, but she had no fruit from this terrible action since she was released.

And just when Dion is giving the order that it is better that they take her to the temple of Apollo to force him to offer sacrifice, a huge statue they had of one of the many idols collapses and the body of the current ruler crumbles into dust. Of course, he died on the spot and the whole town, including the merchant, the greengrocers, and all the eyewitnesses, begin to shout that Cristina’s is the only God. It is not known if they were proclamations of fear, horror, or simple joy.

We all believe that the story ends there but no, a third ruler appears who also coincided with the same religion of the past, this one was called Juliano. Juliano, concerned and alarmed by all the events that occurred before, begins to study quite carefully, always with his region in mind. He comes to the conclusion that everything that had happened was about the works of black magic that the Christians performed, to he was nothing but artifice and incantation.

Juliano begins to delay a supposed plan to make little Cristina “give up” because he has gotten it into his head that it is a simple rebellion, the other part of his plan is to get the support of the Romans and the propitious gods since given to all The acts pronounced have seen the entire region in chaos.

After a while and seeing that the girl is not based on her beliefs, the orders of cruelty begin again, he orders that an oven must be prepared that is at its maximum power to put Cristina there and that her body is consumed. But all this was unsuccessful, legend has it that Cristina was stuck in the burning oven for 7 long days but even so, nothing happened to her, nor did her hair strands burn without the slightest damage.

The regent governor came up with the idea of ​​setting up a kind of room more similar to a hole, but on the surface, he made sure that not even a totally dark ray of light entered it and ordered it to be filled with different types of pests, from snakes , scorpions and any viper known to be poisonous.

But Cristina also came out of this totally unharmed, the astonishment was so great because when she left that room she sang praises of God, in her body she did not have a trace of a single bite it was as if she was not there for the plague she was immune to all .

It is at this point when the governor begins to despair and decides to attack the little girl himself, he proceeds to cut out her tongue, his excuse was: so that he could not pronounce words or invoke the magic that he called dark, because the greatness of God and the angels are so great that after this it happens that they began to sing louder and louder, and then the praise was intoned much better.

There were so many rumors that the region decided to group together and go in search of that little girl, they said that her strength was greater than the weakness of a little girl but the truth is that despite all the Roman brutality it was Cristina who begged to God himself to give rest to his soul and spirit after all the martyrdom he had experienced. After that request they take Santa Cristina, they tie her to a trunk, and with an arrow they pierce her body and she dies on the earthly plane.

Although it seems to us that his short life was tragic, it served and serves to demonstrate the confrontation between good and evil, to show us that if we have faith in God he does not abandon us, it is about doing good because he always triumphs. The remains of her Saint Christina were transferred from Tuscany to Palermo in Sicily where she is revered.