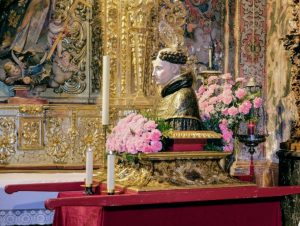 San Álvaro was a devotee of Christianity who soon became a Dominican, he was characterized by preaching the word of Jesus in many places, he knows all his history and the actions he carried out by reading this article.

He is considered one of the most emblematic Spanish Saints and one of the few born in that region, specifically in the city of Córdoba in the year 1360, he was christened Álvaro López de Córdoba y Carrillo, his parents were Martín López de Córdoba and from Sancha Alonso Carrillo, he received his first sacrament in the Church of San Nicolás de la Villa.

He is known as “Fray Álvaro” and also as “Beato Álvaro de Córdoba”, also in the Roman Catholic community as “fra. Alvarus Zamorensis” (Álvaro Zamorano) and in his hometown simply as “San Álvaro”.

This great Dominican also preached in Italian and French regions (although in this country there is no proof that he has preached) He was spiritual director of the Kingdom of Spain assigned in the city of Córdoba by Order of Queen Catherine, who assigned him the function of being tutor to his son John II.

From a very young age and before he was 10 years old, he entered the Order of Preachers, in 1368 he carried out activities as a confessor, he even exclusively received Queen Catherine of Lancaster and her son, the future King of Castile John II, who later became his follower.

His favorite activities were the pilgrimage and since he was young he dedicated himself to various pastoral activities, he also loved reading and studying, he expressed in his actions an intense love towards other people, such that he chose to dedicate himself fully to the priesthood by entering the Convent of San Pablo of the Order of Santo Domingo in the Cordovan capital.

He managed to document himself and be a great professor of art and theology, delve into the contents of the sacred scriptures, he had many young followers and even older ones in his age, who listened to him daily and admired him for his wisdom regarding the holy word.

Historians dedicated to the study of the Dominicans, establish that San Álvaro. He was a person devoted to piety, to the study and teaching of the bounties of God, he received the title of Master of Theology in the city of Salamanca, among his followers he was considered a wise man and a valuable and eminent professor.

During one of his pilgrimages that he carried out in the year 1419, Saint Álvaro was amazed and captivated by the path to Calvary that Jesus traveled during the way of the cross, all this situation of agony and suffering made him reflect so much that they inspired him to form among his students discussion groups on this topic,

The inspiration and impact that Jesus Christ caused in his life allowed him to build and carry out the Convent of Scala Coeli on the outskirts of Córdoba, where through various oratories an oral and physical representation of the “Via Crucis” of Jesus was carried out. .

When he returned to Spain in the year 1422, Saint Álvaro was considered a great scholar of theology and teacher of the teachings, this fame allowed Queen Catherine of Lancaster, who was the widow of King Henry III, to constantly propose to be confessed by Saint Alvaro.

Likewise, the future king of Castile John II receives the confession of Fray Álvaro, who, in addition to being a scholar in theological letters and knowledgeable about the scriptures, also had a very affable character that pleases many people, who sought his advice and company at times of personal adversity.

Fame and links with the spheres of Spanish power of the time allowed him to obtain great economic benefits through donations and alms, which allowed San Álvaro to acquire Torre Berlanga in 1423, which was formerly the Moorish tower located in the Sierra Norte de Córdoba seven kilometers from the capital, which served as a castle for the monarchy,

San Álvaro converted this tower into a convent called Santo Domingo de Escalaceli. There he began to establish the Via Dolorosa of Jesus and projected it throughout the country, where later many Dominican schools and congregations copied the idea and carried out ceremonial activities similar to those implemented by Saint Álvaro.

For a time the order was made up of Saint Álvaro and seven friars, who did hard work and made a great effort to raise and carry out that congregation, they proceeded to build an alternate convent where the hundreds of followers who were already part of it could stay. of the congregation.

The monastery of the “Via Dolorosa”

The construction of this place had some problems since the resources for its construction were running out and it had to request resources from the society of Córdoba, who sometimes refused to inject money for the completion of the monastery.

There is a religious legend in Córdoba that says:

“A divine grace, at the request of the friar of Córdoba, sprinkled those Holy Places with the necessary material for their construction.”

San Álvaro had decided years before that the construction of the structure would be in a place very similar to Jerusalem, so he proceeded to build small hermitages similar to those existing in that city, there were three that allowed the creation of the environment that Jesus lived during the “ Way of the Cross”, let’s see:

This great blessed also dedicated himself to erecting other important works, such as those he carried out on the so-called mount of Calvary, where he proceeded to build a great convent larger than the previous one and which served as the main point for devotion and realization of the “Way of the Cross”.

The structure that was recently rebuilt with the help of the government and the Kingdom of Spain, is located to the south of the main building and gives entrance to the simulation where Jesus was crucified. From the first Sanctuary to Mount Calvary, Saint Álvaro performs the Way of the Cross and sometimes he did it on his knees.

Reina Catalina’s son built a structure influenced by San Álvaro, consisting of a convent called “Scala Dei wanted” where he entrusted the administration and the “a priori dignity” of the building, however San Álvaro refused, since he was extremely dedicated to cultivating his spirit and the word of the Lord.

For many years, in Spain and specifically in the city of Córdoba, a legend related to this Saint has been commented on, it is a story that describes a situation which became a Miracle, later we will see the textual description:

Álvaro was coming from his evangelizing work in the city when he found a dying and hungry beggar on the ground, whom he invited to accompany him to the convent. Being unable to get up, he made the friar cover him with his cape and throw it on his shoulders. Arriving at the gatehouse of the sanctuary, he discovers that what he was carrying on his shoulders is the Crucified Christ himself, the same one that, according to tradition, is still venerated today, in the church of the convent.

For the Catholic Church this great Sunday is called “Fray Álvaro de Córdoba”, he died at the age of 60 on February 19, 1430, the reason for the illness is unknown, and when he died the convent was in his favorite place. he himself had built.

After his death, the Archbishopric of Córdoba approved his cult in 1603, while the Dominican Order of Spain, which includes various congregations in the country and even Italy, approved his canonization. The sacred congregation of Rites, requested a report from the authorities of Córdoba, specifically the bishop of the time Alonso de Salizanes y Medina, in order to verify the activities and actions carried out by San Álvaro.

This allowed Pope Benedict XIV to approve his cult worldwide, on September 22, 1741. He also approved, through a declaration, to consider him Blessed for the orders of Córdoba and Santo Domingo. However, the brotherhoods of Córdoba have Blessed Álvaro as Patron.