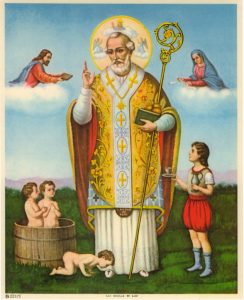 Saint Nicholas of Bari , is a bishop who is known worldwide by various names, including Saint Nicholas of Myra or Bari, and becomes the original figure of the well-known Saint Nicholas or Santa Claus. In the following article we will know everything about San Nicolas de Bari Misas and more.

Saint Nicholas, also known as Saint Nicholas of Myra or even Saint Nicholas of Bari because in the Western regions, it was where his remains were transferred, he became a bishop who lived during the fourth century. More than 2,000 temples are dedicated to him throughout the world.

In the Eastern regions they call him Nicholas of Mira, after the city where he became a bishop, however, in the Western areas he is called Nicholas of Bari, because when the Muslims managed to conquer Anatolia, a group of Christians came to secretly remove the relics of the saint from that place and took them to the city of Bari, located in the regions of Italy.

In that same city, such admirable miracles were attributed to him when he came to pray to this great saint, that his cult was the one that became extremely popular in almost all of Europe. He is considered the Patron Saint of Russia, of Greece and also of Turkey. In the regions of Rome already in the year 550 they had come to build a temple in his honor.

His name becomes very notable in the same way outside the Christian world because his figure has come to give rise to the myth of Santa Claus or Klaus, who is popularly known as Santa Claus.

Saint Nicholas of Bari was born in the city of Patara, in the region of Lycia that is currently within the territory of Turkey, in a wealthy family and since he was a child he always stood out for being a person of pious and generous character. His parents, both fervent Christians, came to educate him in the faith.

After the death of his parents, Nicholas inherited a huge fortune that he put at the service of the needy, according to the hagiography written by Saint Methodius, the archbishop of Constantinople.

When his parents died, Saint Nicholas of Bari distributed his entire fortune among the poorest and went to live in Myra, in Anatolia, what is now Turkey, where he was to be consecrated as a bishop in a very curious way.

It is said in the legend that various priests and bishops were arguing about who was going to be the future bishop, since the previous one had died. Not agreeing, it was decided between them that he was going to be the next priest to enter the temple, who coincidentally became Saint Nicholas of Bari.

In the course of his time as bishop, and in his eagerness to eradicate pagan cults, he ordered the temple of Artemis at Myra to be demolished; which consisted of the largest and most famous temple in Lycia, as well as various other pagan buildings. By a decree of the emperor Licinius against the Christians he became imprisoned and his beard was burned, being later released by the emperor Constantine.

This man came to participate in the Council of Nicaea, coming to condemn the doctrines of Arius, who refused to admit what was the dogma of the divinity of Christ. In order to combat errors, he used a kind of exquisite sweetness, achieving great and more sincere conversions, despite his discreet speculative and oratorical talents that the Orientals come to like so much.

Saint Nicholas of Bari died on December 6, 343 in Myra, however, his remains rest in the Italian port city of Bari, because they ended up in that place after the invasion and conquest of the Muslims in that place. where they were transferred from.

After his death he became the first saint, not a martyr, to come to enjoy special devotion in the Eastern and Western regions. An immense multitude of miraculous stories came to appear about him, disfiguring, on other occasions, his eminent practical and simple character.

There are many miracles that are usually attributed to him. One of the ones with the greatest repercussion is the one that tells that, being a young man, he felt sorry for a deranged hidalgo from the town of Patara, located in Lycia, who, having fallen into the most absolute misery, had seen himself in the obligation to prostitute her 3 daughters (according to legend they were beautiful and honest women.

In order to remedy it, the saint of Bari threw some 3 shoes, according to the other versions, they were bags full of gold, on as many nights through the window of the room “where that denaturalized father slept, with which he provided him with the opportune remedy” .

In another version, which would make history, he dropped a few gold coins down the chimney that miraculously fell into some woolen stockings that the young women had put out to dry, and this is where the tradition of hanging stockings is supposed to be. fabrics that are used to receive gifts at Christmas.

In the same way, on several occasions the bishop of Myra is represented with about 3 gold coins in his hands. Pellicer, in his Historical Treatise, reports that it was common in the court of Philip II of Spain to stage the so-called Shoe Festival on December 6, as the day of Saint Nicholas of Bari, with the eventual participation of certain women or ladies of the Palace.

Another of the miracles that are known to him is that of having come to resuscitate through his intercession some 3 children who had fallen from a tree and died at the same moment. He is also often credited with the miracle of the 3 children who were sacrificed to feed the clients of a hotelier, who were brought back to life through the intercession of the saint. This is the reason why he is represented with about 3 children next to him, in a bucket.

It is said that at some point he saved the lives of about 3 generals who were unjustly sentenced to death. It is also told that on another occasion, having found a group of sailors in the middle of a storm and the protection of Saint Nicholas had been invoked, they managed to see how the figure of the saint appeared on the ship and at the same moment the storm gave in.

The Salesian priest named Jerko Grzincic came to write a Christmas operetta which is entitled “St. Nicholas Arrives”, it is composed of 3 acts. The musical game reaches a large number of children, representing angels, demons, Saints Crispin and Gerardo and some others. The premiere was held for the first time before the 2nd World War in the Ljubljana regions with great success.

The 1st act takes place in heaven with the angels, who get to prepare for what is the great ceremony of going to Earth. San Crispín who is the (shoemaker) and San Gerardo the (tailor) make shoes and clothes for children who are poor.

The 2nd act is developed in a modern hell. The devils, accompanied by the devil at the head, are the ones who plan how they are going to deceive the children and also the young people in a bad way.

The 3rd act goes to Earth. Where Saint Nicholas now comes to welcome the audience, at all times accompanied by angels. The Holy Bishop comes to teach in his speech not only to children, but also to parents, friends and relatives: to be good and hard-working, to be a pious and generous person. Now the good kids get the presents. Likewise, masses are held for San Nicolas de Bari.

Saint Nicholas of Bari became the basis for the figure of Santa Claus, that is, Santa Claus or Saint Nicholas, who is the legendary character who, according to Western culture, brings gifts to children during the Christmas season ( on the night of December 24 to 25 of each year around the entire world).

People or believers have a well-known hymn for Saint Nicholas of Bari, which is the following:

From this stormy sea

From the heavenly homeland.

From the struggles of life

You always come to the rescue

How many implore your help

Poor or rich invoke you.

For your exemplary holiness

And powerful intercession,  Make us chosen

To the faithful who devoted

Your cult we propagate

make us deserve the glory

Prayer to the Saint:

We implore, O Lord, supplicants, to your mercy, and through your great intercession of Saint Nicholas, the Bishop, keep us from all kinds of dangers, so that the path of salvation may be shown to us expeditiously. Through Jesus Christ Our Lord. Amen.

Oh Holy and glorious Saint Nicholas of Bari, the special protector! From that abode of light, in which you enjoy the divine presence, please turn your pious eyes towards your devotees, and reach them, O Lord, with those graces and your convenient aids for their present needs, both spiritual and corporal, and very in particular the grace (at this moment the grace that is to be obtained is going to be mentioned) May it be conducive to my eternal salvation.

Please, your devotees ask you to protect them too, oh glorious holy bishop, their Supreme Pontiff, the holy Church and this holy city. They beg you to lead to the straight path of salvation those who dwell in sin, or even wrapped in the darkness of ignorance, error and also heresy.

They ask you to please comfort all the afflicted, help those most in need, comfort the fainthearted, defend the oppressed, even assist the sick; and finally make everyone come to experience the effects of your powerful patronage towards the supreme Dispenser of all goods. Amen.

This is another prayer to Saint Nicholas of Bari , which is very well known:

Oh blessed Saint Nicholas of Bari! whom God has come to glorify with countless numbers of miracles, manifesting his will that devotees or believers turn to him, in moments of great difficulty in his life, trusting in your protection. Amen.

Prayer to Saint Nicholas to ask for his protection

Oh blessed Saint Nicholas of Bari! whom God has come to glorify with the countless miracles manifesting his will that the devotees come before him, in the moments of greatest difficulty in their lives, trusting at all times in his protection.

O miracle of charity! where they all go:

So your devotees humbly approach before you to be reached by your grace and protection. Amen.

This is one of the images referring to San Nicolás de Bari.