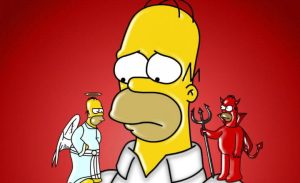 Moral Conscience , said in a simple way, is that little voice that we call “conscience” and allows us to differentiate good from evil. In this article we will be explaining everything related to moral conscience: concept, characteristics, types and much more.

The Moral Conscience is what allows us to distinguish good from evil, but also, strengthen the principles, values ​​and commandments that help you be a better person, the conscience must be educated or adapted to civil or religious laws.

It should be noted that the environment of this is completely personal, since it is the fruit of the mind, in addition to the education and cultural background that each individual has.

We can say then that moral conscience is extremely important because it is a kind of “mental judge” that helps us regulate our behavior. In other words, it is the highest authority of the human conscience, so to speak, and it does not differentiate between men and women, believers and non-believers.

The realization of good

Our moral conscience is conditioned by certain norms that determine what behaviors or actions are “correct” and which are considered “incorrect”? Also, general and universal laws influence, as well as our own beliefs and concepts of what is “right” and what is “wrong”.

All these laws, norms and beliefs allow us to internalize, define and distinguish what we know as socially accepted role models. Basically, it is a kind of fair and necessary indoctrination for the most harmonious development and social development possible.

Society plays a very important role in building our moral and ethical conscience. Through education we are “molded” and transformed into good men or women.

As human beings we have freedom as a gift that allows us to carry out beneficial actions, but this same freedom can also lead us to commit acts of a malicious nature or malpractice, despite the fact that we understand that it is morally or ethically “wrong” .

The importance of moral conscience lies in understanding that every act has a consequence and every consequence must be assumed responsibly and without hesitation.

The importance of the family example

There is no greater example of correct moral and ethical conscience for a child than their parents. These are a reference and guide for the growing child, thirsty to learn and imitate them in everything (even unconsciously).

If there is a good example and rules that are enforced at home, and also reinforced by teachers and institutions, the result will be an exemplary child and a model adult.

The family provides from the origin, the stimuli that satisfy the emotional needs, a period that guarantees the psychic and physical development of the little ones and the example is the best pedagogical instrument available to the family, this is the school of life and the parents, natural mentors.

Within the family we develop our first muscular skills, and we acquire language through imitation and games. We gradually build our personal identity, and develop skills and attitudes that will allow us to function throughout our lives. Even without intending it, the behavior of the parents appears before the children as a chronicle or basis of their behavior.

The example is one of the best tools that our parents have to assume and be able to achieve the complex task of educating .  These actions leave a mark on the child, mainly in the way he builds and perceives reality, and sharing with others and the amazing discovery of everything around him.

Our self-esteem and self-perception are developed in childhood. Attitudes, values, security or fear, ways of relating to others, depend largely on what is learned through observation and imitation.

Some examples of the impact that parents have on their children are: To relate courteously and cordially with others; aspects such as hygiene, education when expressing ourselves, the willingness to help others; the posture; learning housework and home care, among others.

As we can see, our parents leave a great mark on us in every way, and it is quite strong, in terms of moral and ethical conscience.

One of the characteristics of the main moral conscience is, without a doubt, the ability to reflect on our past actions. This observation (without self-judgment) allows us to adjust, recognize and assume our responsibility in the face of an event, without this ability to reason or “awareness” we would be unable to evolve or build better versions of ourselves.

Moral conscience is then the result of our experiences and learning, in addition to social impositions, which cause us to repress certain behaviors considered “incorrect”.

Knowing and recognizing ourselves is a reflective, moral and conscious path and act that arises from freedom and allows us to learn from our mistakes and better understand our human nature, skills, abilities, it is similar to an examination of conscience, without judging or punishing us. .

The moral conscience is presented to us as a universal knowledge, better known as “common sense”, which carries an important burden on how we should behave according to the regulations of the home, institutions and society in general.

Understanding the elementary laws and truths condition the laws of what is “right” or “wrong” in our consciousness, and in turn, this shapes our own behavior.

Perhaps, you wonder if there are different types of moral conscience, and the answer is yes. In reality, they all come from the same “source”, so to speak, but the focus is what changes.

In tune with “common sense”, it deals with “truths” socially accepted by a group, based on certain “traditional” moral norms. Some examples: Use of the uniform in institutions or companies, etiquette rules, among others.

It refers to when the person acts according to their own principles, values ​​and beliefs, with the intention of defending their position in a specific situation. Some examples: Activists, vegans, environmentalists, among others.

The person acts with “rectitude” and “objectivity”. An example: a judge passing sentence.

The person acts impulsively, according to what he or she believes is correct, however, the majority do not share their vision.

We can speak of this type of conscience when a person makes a mistake due to ignorance, but regrets it or does everything possible to repair the damage. Also, it applies in the case of a person who does a good action that in the end turns out to be not so good before others, but who equally repents or corrects his behavior later; To err is human, but to assume our responsibility is wise.

When a fault is committed that has no qualms no matter how much one begs for forgiveness. For example: When two people argue and say “things without thinking”, even if they later regret it, the damage has already been done.

Present in those people who are not honest with themselves, and are even unable to recognize their faults. It simply acts according to its passions and impulses, and even knowing that it is not correct, it deceives itself by praising itself for its “righteous” and exemplary conduct.

Those people who follow the regulations and laws of society to the letter, but go to the extreme. Well, for them, it is inconceivable that others do not meet these standards according to their exaggerated perception of exaggerated righteousness.

This type of conscience can, in turn, have a somewhat “negative” tone, because although it complies with the rules, it intends to impose its rigidity on others, which is why it could be considered a “false conscience.”

It is the opposite of the previous case, this type of consciousness is rather extremely relaxed. He is that type of person who “doesn’t care about anything” and lives in an apparent zen state, in which nothing disturbs him, and sometimes he wavers the regulations.

Quite similar to rigid conscience- The person is hard on himself and the slightest mistake is a reason to unleash chaos against himself. In other words, he is the type of person who blames himself for everything and classifies his actions as immoral, sinful, incorrect, among others.

Judge of our actions

Being judges of our own actions can sometimes become a vicious circle and a not at all positive attitude that only generates stress, tension, frustration and moments of bitterness, shame, anger, among others.

Moral awareness should not be taken lightly, as it can affect us significantly. Yes, morality is important in our lives, but it should not be a reason to live a life of self-punishment.

They are concepts that, as we saw in the types of moral conscience, vary from one person to another. What may be morally correct for some may not necessarily be correct for others.