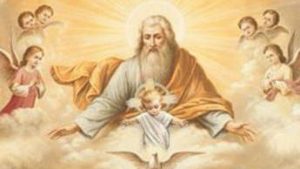 If you read or hear the word “made in the image and likeness of”, you immediately associate it with being identical, but this refers to the fact that you have dominion and care over all creation. In this opportunity we will teach you through this article, everything about made in the image and likeness of God , and much more do not stop reading it.

What does it mean to be made in the image and likeness of God?

Such an assertion is based on the Holy Scriptures of the Bible, for example, in the book of Genesis chapter 1, verse 27 it is evident that God indeed had the wonderful idea of ​​creating us in his living image.

“God created man in his image; in the image of God he created him; male and female he created them”

The man, without distinction of gender, begins to be the image of God, from the moment we are conceived by our parents, that is why the dignity of God is present in each phase that we have to go through, in our lives. earthly. This truth is announced by the Catholic Church, not only through the word. He also does it with the power of reason, calling on all men to receive this truth, in the hope that we will be a better religious society.

Characteristics of being the image of God

We are special beings, unrepeatable and, furthermore, privileged to have the happiness of having been made in the image and likeness of God, similarities that are related to the social, mental and moral. Details of those common features are given below.

God created man, so that he could reason and act of his own free will. That is, he is capable of doing his own logical reasoning and choosing the best option. This is an unequivocal characteristic of how God reflects his intelligence in us.

That is why, when a man invents a tool to improve the tasks of a job, writes a book, to share his experiences, draws a landscape, composes and enjoys a symphony, does mathematical calculations, gives his dog a name, the woman or man, they are attesting that they were truly made in the image of God.

God created humanity in justice and innocence, and this is a reflection of the holiness of the Father. When the Creator saw all that he had done, his heart rejoiced so much that he called it “very good”, as evidenced in Genesis 1:31 . It is the conscience of the human being, the compass of morality, and I see this quality when man dictates a Law, because he departs from sin and confirms once again that we were created in the image and likeness of God .

Men and women were created to live together in society and as a couple. In paradise the first episode of relationship with others was with God, and so the Bible says in Genesis 3:8:

“And they heard the voice of God walking in the garden in the cool of the day; and the man and his wife hid themselves from the presence of God among some trees of the garden.”

Another sign that God intended for man not to be alone is the reason why he created Eve, his wife. To confirm this fact, just read chapter 2, verse 18 of the book of Genesis:

And then God said, “It is not good for man to be alone; for that I will make him a suitable partner”

In every moment that passes in our lives and a couple gets married, we make another friend, we go to church or hug a child, we are in another demonstration that we were made in the likeness of God.

Is the image of God also in the difference between the sexes?

Because human beings were made in the image and likeness of God , they exist only as male or female. This sexual differentiation, far from being seen as something accidental or accessory to personality, in itself is an element that constitutes personal identity.

Because we were created in the living image of God, all human beings are called to participate in love and communion. This call to establish loving relationships is related to the need for union between a man and a woman for procreation by divine mandate. The roles attributed to one or the other sex may vary over time and space, but the sexual identity of each person is not a cultural or social construction.

Through the act of procreation, God is telling us that grace is transferred in the image and likeness of God, to children who were conceived under the laws of the church and society. But this does not mean that it leaves out children who were procreated in conditions of violence and sexual abuse.

“This is the book of the generations of Adam. In the day that God created man, in the likeness of God he made him. Male and female created he them; and he blessed them, and called their name Adam, in the day they were created.”

As God creates man in his image, he also placed within the human conscience, precepts of a law, which is known as “Natural Law”. Said law is nothing more than a set of moral norms, which are common to all men that can be discovered by simple natural reason, and also because its precepts originate from human nature itself.

The natural law, sculpted by the Creator in the hearts of men, consists of a participation in the wisdom and goodness of God, through a primal moral sense, which allows man to make his choices, through the use of reason, in other words, to choose between good and evil.