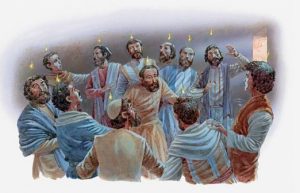 Pentecostalism is the movement that brings together evangelical churches, whose doctrine is based on the baptism in the Holy Spirit. In this article we will specifically review the history of the Pentecostal church. We will also address some issues related to its doctrine and some characteristic aspects of this church.

What is the pentecostal church?

The Pentecostal Church is part of the evangelical movement of Christian churches and denominations whose doctrine is based on the baptism in the Holy Spirit.

Now, what is the baptism in the Holy Spirit? Well, this is a Christian doctrine, which includes a set of theoretical conceptions that are held to be true and, in this case, are based on what the book of the Acts of the Apostles of the New Testament indicates.

This book tells how a multitude of faithful believers received the Holy Spirit, just as Jesus had promised them on his pilgrimage through the world at that time.

This doctrine offers two different interpretations of said baptism, according to the different Protestant groups. So we have:

Find out which is the largest evangelical church in the world.

Pentecostalism first arose in the United States in the early 20th century, when members of the Wesleyan-Holiness movement began to speak in tongues.

This constituted an event, which meant a milestone within this movement and which was identified as the “biblical evidence” that the Holy Spirit had baptized them, as narrated in Acts 1:8, 2:1-4.

It was said that this baptism in the Spirit gave the power to live an “apostolic” life and that, therefore, one could participate in an “apostolic” ministry that included the charisms described in 1 Corinthians 12:8-10.

On the other hand, other Pentecostals were also reported, who emerged from the Reformed tradition or linked to the teachings generated from the Convention of Keswick, England, mainly to promote practical holiness through prayer, discussion and personal exchange. Thus, the Keswick model was designed.

It can be said that this Pentecostal originated with the revival or commotion produced in the heart, especially by preaching or by the work of the Holy Spirit.

This conception spread throughout the territory of England in the early seventies of the nineteenth century.

The Keswick movement, which has been held every year since 1875, is significantly evangelical in character, supported mainly by the evangelical branch of the Anglican Church.

It has to do with everything that concerns the highest Christian life. These saw sanctification as a continual search and not as a crisis experience.

In view of these divergences in the notions of sanctification, a debate arose that gave rise to the first great schism among the early Pentecostals.

There were churches like the Church of God in Christ, the Church of God (Cleveland, Tennessee, USA), as well as the International Pentecostal Holiness Church, which held the top position, which is known as “holiness.”

While others, such as the Assemblies of God and the International Church of the Foursquare Gospel, stayed with the second position, which they called “work finished”.

However, his basic idea is always to insist on the baptism in the Holy Spirit, which must be given to those who have received the baptism of water and through which the necessary charisms are granted as a testimony.

The origin of the Pentecostal Church is linked to “awakening movements” such as those that occurred with greater relevance at the beginning of the 20th century in the United Kingdom, led by the miner Evan Roberts, in 1904; those led by WJ Seymour in the United States, in 1906; those of pastor Barrat, in Scandinavia in 1906 and, thus, in many other places, which leads one to think that there is no specific founder.

As for the awakenings, those of Pentecostalism that occurred in the United States stand out in a special way.

This Pentecostalism had as its driving point the contemporary manifestation with the so-called Azusa Street Revival, carried out by the African-American pastor William J. Seymour in an African Methodist Episcopal Church in the city of Los Angeles, California.

This Revival was a key event in the events of the Pentecostal movement and was characterized by the series of Pentecostal revival meetings, which were held in that place.

Eighteen months after the movement began, many evangelists emerged, who traveled throughout North America preaching and many missionaries who ministered in Europe, Africa, the Middle East, Asia and Mexico.

As we already know, in the Christian environment, the name of revival is given to the religious awakening experienced by the faithful in a certain place that lead to definitive conversion.

In the case of Protestants, one of the branches of Christianity, revivals are processes through which spiritual conversion is achieved thanks to divine intercession and, in some cases, they are often seen as restorationist processes or the search for a way of healing. purest and oldest religion.

In the United States, two revivals are historically recognized that marked a milestone in the trajectory of the Pentecostal church, namely:

As a result of this preaching, the sense of having a personal revelation of their need for salvation by Jesus Christ was exalted in the listeners.

Regardless of rituals and ceremonies, this great awakening consisted of a Christianity of personal approach of the common man to God. This rapprochement is achieved through the development of a precise sense of spiritual conviction and redemption. In addition, introspection and commitment to a new standard of personal morality are contemplated.

This great awakening focused on the people and members of the church, achieving the change of their rituals, piety and self-awareness.

It is said that on the occasion of the awakenings they focused on these signs of identity and the evangelism of a new creation was spread in the original republic.

This term antebellum, which means “before the war”, refers to the period in which there was a rise in secessionism, in which the Confederate States of America, made up of the thirteen states that from 1861 to 1865 separated from the United States. United of America.

This led to the American Civil War or Civil War between the Yankees and the Confederates.

From there arose this period of the second great awakening, which was characterized by intense Christian evangelizing activity with innumerable conversions.

It also generated a deep religious sentiment in churches and congregations throughout New England, the Mid-Atlantic, the Northwest, and the southern United States.

An intensification of evangelization was registered, in which social causes were promoted, such as prison reform, abolitionism or the annulment of laws, precepts or customs that violated ethical and moral principles and the promotion of abstinence or resignation voluntary response to a desire or appetite for certain pleasurable bodily activities.

As the founder of this Pentecostalist religious movement in the United States, the African-American preacher William Joseph Seymour is recognized, who was born on May 2, 1870 and died of a heart attack on September 28, 1922.

He was an American pastor, son of a former slave in Louisiana, who became a regular student in 1905 at the newly created training seminary founded by Charles Fox Parham in Houston. This was the school that sustained his fundamental principles of the Holiness movement.

In addition, there he experienced speaking in tongues, according to the gifts offered by the Holy Spirit.

Eventually he moved to Los Angeles, a city where he began his church service. However, his Pentecostal doctrine was removed from the parish where he was appointed.

Looking for a suitable place where he could continue his work, he found an abandoned building on Azusa Street in downtown Los Angeles, where the revival took place.

Learn more about the Methodist Church

The word Pentecost comes from the Latin Pentecost, which, in turn, comes from the Greek πεντηκοστή, which translates as “fiftieth” and the term refers exactly to the 50 days that pass from Easter to the time of Pentecost.

On that 50th day there is a Jewish celebration of Pentecost or the Feast of the First Fruits and it is the symbol that Pentecostalism took as its reason for being and existing.

In this event, Christians commemorate the descent of the Holy Spirit on the disciples of Jesus Christ, as described in chapter two of the book of Acts of the Apostles.

This Jewish tradition, also called the Feast of Weeks or First Fruits, is celebrated by the harvest of the first fruits that are collected.

This doctrine is supported by various beliefs that are followed by its faithful.

The fundamental beliefs on which Pentecostalism is based are presented below.

Also read about who founded the pentecostal church

The Pentecostal movement brings together a large number of denominations, independent churches and para-church organizations that rely on the impact of the action of the Holy Spirit on the lives of faithful devout Christians.

Now, there are many characteristics that can be pointed out of the Pentecostal Church by virtue of the diversity of currents that exist. The most significant are listed below:

This movement has had a vertiginous growth since its creation. It is said to have evolved much further than the Adventists, Jehovah’s Witnesses and Mormons, which appeared long before Pentecostalism.

It has even been pointed out that they have outnumbered all of these movements, specifically in areas that were de-Christianized or poorly evangelized. This was the case in Lutheran Scandinavia or Latin America.

Currently more than eight million faithful devotees are counted in its ranks.

Read what God’s promises for the family are about