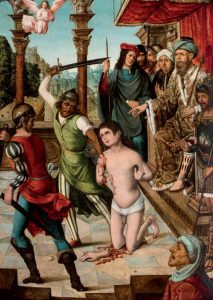 San Pelayo , Christian martyr and canonized by the Catholic Church for being an example of what it means to live in “juvenile chastity”. He gave his life to Christ and kept his faith strong despite the inhuman suffering and abuse he endured.

The history of San Pelayo

San Pelayo , was born in Galicia. At the age of ten, the holy child arrived in Córdoba in January of the year 921 and after the defeat of the battle of Valdejunquera he was imprisoned in Córdoba along with his uncle Hermigio (bishop of Tuy at that time).

After three and a half years, his uncle is finally released, but San Pelayo is kept as a prisoner. During the time he was in jail, according to the priest Colonel Rabel, the boy, despite his young age, maintained a highly supernatural attitude, since he saw seclusion as a test, and in turn, it served as a space for purification by his sins.

Many wondered what was this behavior due to? His fellow inmates don’t blame him and his fame doesn’t silence him.

San Pelayo was chaste, sober and peaceful, prudent, attentive to pray, assiduous in his reading, and not at all, forgetful of the precepts of the Lord, with whom he always had conversations.

Its natural beauty was communicated to Abd ar-Rahman III, who ordered that the child be brought before his presence. At that time, pederastic homosexuality was a fairly common and recurrent fact in Muslim Spain, however, San Pelayo did not give in for a moment to doubt his faith, and even insulted the Caliph when he tried to seduce him.

A Muslim witness narrates that Abd ar-Rahman III, told the boy that he would raise him to such honors with a high office if he denied Christ as his God and affirmed that the prophet Mohammed is the true “god”.

I was asking this divine creature, don’t you see how many kingdoms I have? And he tried to seduce San Pelayo with material goods, offering a large amount of gold and silver, luxurious clothes, young men to serve you, horses to ride, pleasures to enjoy, and even get him out of jail and as many as he wanted, and even honors to his fathers.

San Pelayo , firm and clear in his convictions replied: I decide that what you promise Emir is worth nothing! And I will not deny Christ. I am a Christian, I have been and I will be, because all that you offer me has its end and passes, on the other hand, Christ, whom I adore, cannot have an end since he does not have any beginning either, since he personally is with the father and the holy spirit who remains as the only god who made us out of nothing and with his omnipotent power preserves us.

Abd ar-Rahman “in jest” began some touching, but San Pelayo yelled at him: Go away, dog! And he told her, do you think I’m like yours? An effeminate and he tore the clothes he was wearing, preferring to die honorably for Christ than to live shamefully with the devil and sully himself with his vices.

Abd ar-Rahman III, despite that response, did not lose hope of seducing the child, so he ordered the young men of his court who adored him to see if, by apostatizing, he would surrender to so many promised greatness, but with the help of God he remained. firm and remained fearless, proclaiming that there is only christ and affirming that he would forever obey his commands.

The Emir, seeing that the young man rejected his wishes, ordered: “Hang him on iron pulleys! And once constrained to the maximum and raised high, you will lower it repeatedly for as long as it takes for him to either expel his spirit or deny that Christ is God.

San Pelayo, went through such a test with a moving will, he remained unperturbed, and in fact, he did not refuse at all to suffer for Christ. Knowing the Emir Pelayo’s firmness, he ordered that they cut him to pieces with the sword, member by member and be thrown into the river.

The executioners for their part, by virtue of the order received, after drawing the dagger, frantically indulged in such cruel ridicule against it, that one might think that they executed a sacrifice that, without them knowing it, it was necessary that it be offered in the presence of our Lord Jesus Christ.

One of them suddenly amputated his arm, another blinded his legs, another even did not stop injuring his neck, meanwhile he remained unafraid like a martyr, from which drop by drop a lot of blood emanated instead of sweat, surely without invoke no one else but our Lord Jesus, because he did not refuse to suffer saying Lord deliver me from the hand of my enemies!

At this moment, the young Pelayo surrenders his spirit to the presence of God, his body, on the other hand, was thrown to the bottom of the Guadalquivir river, but there was no lack of believers who searched for him and took him solemnly to his grave.

The boy Pelayo died at the age of thirteen (13) and a half years suffering martyrdom under the “reign” of Abd ar-Rahman III, in fact, who reigned at that time, has done so and will do so forever is our Lord. Jesus Christ. To him be glory and power forever and ever.

The martyrdom to which the young Pelayo was subjected when fervently defending his faith was the justification that led him to canonization, and almost immediately, he began to receive adoration.

The remains of San Pelayo were considered “relics”, transferred to León, and later, to the Benedictine monastery of Oviedo, which bears his name.

Arrows and Pelayos in the Franco regime

The name “Pelayos” in honor of the holy child, was proposed by the New Spain or Imperial Spain organization at the time of National Catholicism, for which the youth organization of the requetés (Carlist) was baptized, and its female section was called “the daisies”.

At the height of the Spanish Civil War (1983) and after the Unification Decree, it was decided to rename the unification of both organizations as “flechas y Pelayos”. The members of this other organization called themselves “arrows.”

There are many Spanish towns that have included San Pelayo as a way to honor the life of the young martyr. Even a Colombian town was also baptized with his name.

As we mentioned, San Pelayo Mártir is the patron saint of various Spanish towns, among them, we can mention:

Morales of the King (Zamora)

La Prada, a town in the municipality of Valle de Tobalina (Burgos)

La Cueva, a town in the municipality of Castañeda (Cantabria)

Hazas, a town in the municipality of Soba (Cantabria)

Duález, a town in the municipality of Torrelavega, (Cantabria)

Morel of the Oteros (Leon)

Institutions under his patronage or dedication

There are numerous religious institutions and buildings that have adopted the name of San Pelayo or “San Paio”, among them:

There is a bridge called Puente de San Paio, which joins the Pontevedra towns of Puente Sampayo and Arcade, where the Battle of Puentesampayo (1809) War of Spanish Independence took place.