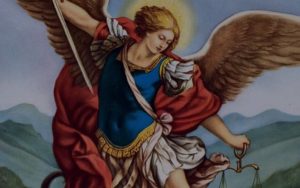 How many Archangels are there in the Bible and their objective? They will be revealed in this article where we will know their names and what their responsibility is according to the Holy Word.

How many archangels are there in the Bible?

To begin to answer this question: How many Archangels are there in the Bible? We must responsibly point out that the answer will depend on the religious doctrine that is followed, that is; There are marked differences between the Catholic Bible, the Reina-Valera Bible or the Protestant version of the New Testament.

Having then clear that the number of Archangels varies according to the Bible, it is also important to know the difference between an Angel and an Archangel. If there is something indisputable in the Bible, it is the existence of the Angels, who are the messengers, servants of God, they are incorporeal ethereal beings, created by God, they are those beings who have only contemplated the Lord and are at his total service.

The wonderful thing about their existence in the faith of men is that they are equidistant between God and man, carrying their message, listening to their mandates and our requests. For their part, the Archangels are also angels but with a distinction of rank, they are the leaders, the princes are the angels with the highest hierarchy and therefore with the greatest responsibility.

Although their responsibilities are similar to those of the angels, their contemplation, adoration, listening and protection is permanent, without rest, without distraction, they are the warriors, messengers and protectors of the mystery. Knowing then the differences between angels and archangels, let us begin by indicating how many archangels there are in the Catholic Bible, in it they indicate 7 archangels which are called the Archangels Michael, Gabriel, Rafael, Uriel, Jophiel, Shamuel and Zadkiel.

However, the Catholic Church recognizes only three of them that are named in the Holy Scriptures where they indicate actions of archangels, Michael whose name derives from Mi Ka El which means “who is like God?”, Gabriel which means “strength of God” and finally Rafael whose name means “medicine of God”.

When a more in-depth analysis of the origin of the seven archangels is carried out, it is concluded that it is of Jewish origin, however, the Catholic Church, after analyzing, examining and verifying, indicates that it is possible that they have emerged as archangels as a result of interpretations of books. non-canonical, therefore, they established only the three archangels mentioned, Michael, Gabriel and Raphael.

How many archangels are there in the Protestant bible? They only name one archangel and this is Michael, while Gabriel and Rafael are referred to as angels, although Uriel, Jofiel, Shamuel, ZadKiel are not named, they are angels that are sometimes named by some shepherds. And you can then ask yourself why there is this great difference between the two scriptures? The answer lies in the existence of an apocryphal or deuterocanonical book.

There is a controversial interpretation between both doctrines of how many archangels there are in the Bible, since Christians consider that these books have no biblical foundation, since they were written in the period of absolute silence, that is, in the period where God did not communicate. with any of his apostles, therefore, they were not written by the presence or inspiration of the Holy Spirit.

In the same writings of the apocryphal book it lends itself to confusion since Uriel, Jophiel, Shamuel and Zadkiel are not defined as angels or archangels in the Holy Scriptures. The only Archangel that is common in both the Catholic Bible and the Christian Bible is Michael.

Miguel is indicated as Prince, High Prince, Chief Prince, that is, Miguel is an Archangel because a superior hierarchy is indicated from him, so it is clearly interpreted that the others are angels who are led by the Archangel Michael. (See also: Christianity in Europe )

In Daniel chapter 10, verse 13 it mentions “But the Prince of the royal region of Persia, stood in opposition for twenty-one days and look, Michael one of the prominent Princes came to help me.” For his part in the New Testament in Revelations chapter 12 verse 7 “And war broke out in heaven Michael and his angels fought with the Dragon, and the Dragon and his angels fought”

Despite his strength and might, Archangel Michael is obedient and submissive before God. Archangel Michael is commonly humanized as a warrior who wears armor, has a shield and a sword. It is also found in figures with a position in which total domination over the devil is shown, Lucifer being then the most powerful of the rebel angels and Michael dominated him, who of the archangels can be stronger and more powerful than Michael? ?.

Miguel was the architect of expelling the rebellious angels from paradise, for which he is recognized as the main defender of God. Archangel Michael is in charge of making us distinguish good from evil, he is in charge of exposing the devil that stalks us in a thousand different ways, making us doubt.

His image guards the place where the Pope is sheltered in case of any danger, people always invoke him and pray on his behalf to feel protected when they must move or face a situation, Saint Michael the Archangel is always asked to protect us with his sword and his shield.

He also interceded with Joseph to desist from his position against Mary, it was Gabriel who made him understand that Mary was pregnant by the Holy Spirit, that they would be parents on Earth of the son of God. It was also he who announced to Mary that she had been chosen to conceive Jesus, the son of God.

It is Gabriel, then, who has the ability to deliver the message of the Almighty to men, in addition to delivering it in such a way that it can be understood without any kind of confusion, nor any kind of rejection or wrong interpretations.

This angel is recognized as the healer, his very name means Medicine of God. He is the angel that is also recognized according to the Catholic Church as the patron of conjugal love, of boyfriends, of pharmacists. His responsibility is interpreted as the healing of the soul.

It is a story subject to the fact that Sara was a woman who had never been able to finalize her marriage, because her husbands died the same night of the wedding, for which she was considered to be stalked by a demon named Asmodeus who was in love with her and is the angel Rafael who kicks him out.

After having united them and healed and sanctified their union, the only thing he asked of them was that they bear the glory of God, praise his name for everything received. The only Book that speaks of the angel Raphael is the Book of Tobias, however, he is not named as an archangel in any biblical book.

There are billions of angels, however, only three of them have their own names, one is the fallen angel Lucifer, Gabriel the messenger angel and Michael the archangel. Lucifer is named in Ezekiel 28:16 “Because of the multitude of your hirings you were full of iniquity, and you sinned; so I cast you out of the mountain of God, and cast you from among the stones of the fire, oh protective cherub”.

Luke 10:18 “And he said to them, I saw Satan fall like lightning from heaven.” Also by Isaiah 14:12 “How you fell from heaven, O Lucero, son of the morning! You were cut down to the ground, you who weakened the nations” and finally clearly in Revelation 12:9 “And the great dragon was cast out, that serpent of old, who is called the devil and Satan, who deceives the whole world; he was cast down to the earth, and his angels were cast down with him.” (See also: prayer of protection for children and grandchildren ).

For his part, the angel Gabriel, is the emissary or messenger of God is widely named and his responsibility is described in the Book of Daniel 8:16 “And I heard a man’s voice between the banks of the Ulai, who shouted and said: Gabriel, teach to him the vision” ; 9:21 “I was still speaking in prayer, when the man Gabriel, whom he had seen in the vision at the beginning, flying swiftly, came to me about the time of the evening sacrifice.”

And finally, the archangel that has his own name in the Bible is Michael, and as we have mentioned, he is the only angel that is really named with an archangel hierarchy in the Bible. The first mention of it is in the Book of Daniel chapter 10 verse 13.

There are spiritual battles and in the Bible it is indicated that these have been liberated by the archangel Michael and despite having thrown the rebellious angel out of heaven, he never cursed him, nor did he judge his sins, he only defended the Kingdom.

The Bible describes him as a defender or guardian of the people of God, in the Book of Daniel chapter 12 verse 1 “At that time Michael will arise, the great prince who is on the side of the children of your people and it will be a time of anguish, as it was never since there were people until then; but at that time your people will be delivered, all those who are found written in the book “

It describes times of pain but God does not abandon us and will send his archangel to defend us and take care of everyone. God has planned for us a future in which Christ the Redeemer will come, because God wants us all to follow his path and be part of that people of Israel and the archangel will take care to achieve that design.