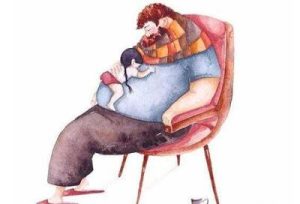 Children don’t come with an instruction manual, but my father bypassed all obstacles and difficulties to rise up as the wisest and most important being in my life. All his hugs, his loud laugh and that warm look that always answered me, that always silently took care of me, were etched in my heart.

It is curious how, over time, most studies carried out on the figure of fathers have not received the value they really deserve. Somehow, his role was focused only as an economic pillar within the family dynamics or as that “present but absent” figure who was not involved in the education of his children.

“A father is a specialist who has never studied his specialty”. – Alexander Shuterland Neill

Something we all know is that there are many types of fatherhood and motherhood. There are toxic mothers and exceptional mothers . There are parents who are insensitive and true everyday heroes. People who set an example, who inspire and who give happy children to the world. Responsible adults who have an example in their parents.

Currently, there is already a real attempt to rescue the father figure. Breaking the idea that a baby, supposedly, only needed maternal closeness to grow and develop.

Our parents are those essential figures who deserve to be recognized. Whether they left us a long time ago or we have them with us, we all know what their skin and hearts were made of: bravery, silent sacrifice and emotional pride for their children.

The present father, the father as an emotional figure

We shouldn’t see parenthood as a gender-separated task. Sometimes even language itself becomes exclusive. “My husband helps me with all the chores, he is a great father.” The father does not help , the father is also a fundamental part of the whole family dynamics. Because creating and taking care of a house is nobody’s inheritance.

Statistics show that the figure of single-parent families is a reality on the rise. In fact, in countries like the UK the percentage is as high as 23%. In 1993, the number of single parents worldwide was 9% and today it is 14%.

They are single-parent families where men are responsible for raising. They are the ones who educate and raise their children with the same efficiency and happiness as single mothers.

On the other hand, believe it or not, parents’ brains also undergo several changes with the arrival of a child. It’s not just women who go through that important hormonal change with which they start to breastfeed or create that bond with the newborn.

Human brain structures also have a complex “parental network”. In this way, the same patterns of emotional and cognitive participation of women are adopted.

There are several studies that show us several aspects. Seeing the couple with the baby generates a series of very specific hormonal changes in the father. Even holding the newborn and smelling him increases the release of oxytocin, prolactin, and glucocorticoids and decreases testosterone.

In this way, an unbreakable union is generated from this authentic bond that has the same strength as a mother for her child.

For every sacrifice, for every sleepless night, for being there… Thank you Dad!

A father doesn’t wear a cape, he’s not a superhero. It neither works like magic nor does it allow us to touch the moon swinging high. However, it will make us believe – and of course, we will. Because one of their main concerns is to make us trust that nothing is impossible and that we can achieve almost everything we set out to do.

Not all parents are adept at affection, we know that. However, they will guard your bedside when you are sick.

They will be your protector of sweet dreams when nightmares catch you and the person who leaves anything to pick you up when it rains.

They don’t have schedules when you order something, and it doesn’t matter how old you are… Because in their eyes, you are and always will be someone to protect and care for above all else.

A father’s love builds our personality

A father’s love gives us a way to face life based on that courage that understands sacrifices, that loves without asking for anything in return. It is, above all, that healthy bond that knew how to meet our emotional needs to shape the courageous and mature person we are now. We all carry many of our parents within us. It is a treasure that survives, that transcends and moves us. So don’t hesitate, if you still have your dad with you, spend some time with him. Because one day you will wake up and there will be no more time to tell him all the things you want and feel.